Megan Terry is the founding President of the Australian Quilters Association, one of Australia’s first patchwork and quilting groups.

Megan was Guest Speaker at the AQA 40th Anniversary Celebration this year. Megan’s book ‘Come to the Edge’ was published in 2008.

Megan shares her story below:

Over the years, I’ve been asked how I came to make the work that I did, so I set out to explain how your life can get into your work, making it authentic and original.

Years of life, travel, photography and classes in various artistic pursuits, has gradually influenced the way I express myself which becomes individual.

I learned to use a computer and with help, designed and produced a book on this very subject which from first thought to finished product took me 20 years.

I began teaching patchwork in 1972 at the Nunawading Neighbourhood Centre to develop some quilting associates. As a result of this, in 1979 some students and I formed what is now The Australian Quilters Association of which I was President for five years.

I continued to work, teach and exhibit until 1989 when I gave up teaching and began to paint while I continued to sew. I gave up quilting altogether in 1999 to concentrate on my painting. Nowadays, I drift between sewing and painting as the mood takes me. 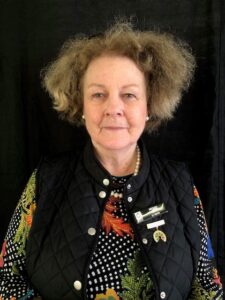